The 13 Kans of Maha Vessantara Jataka 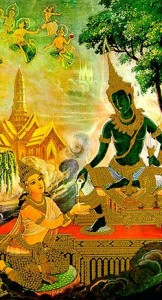 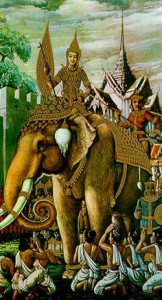 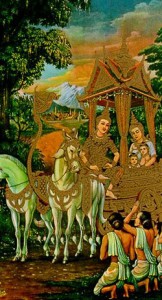 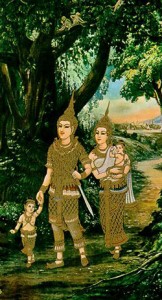 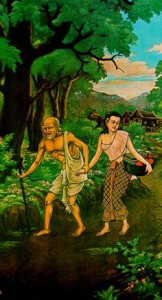 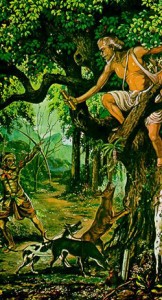 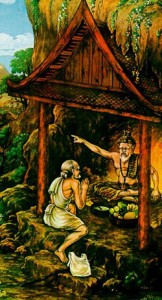 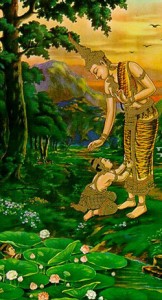 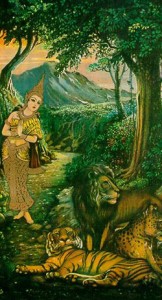 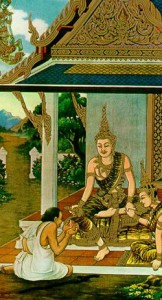 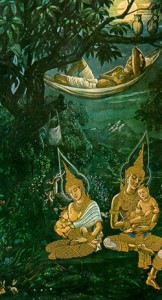 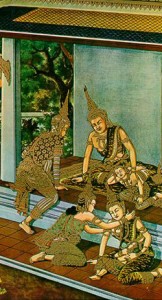 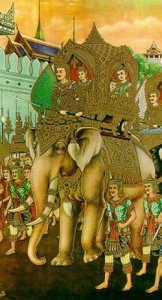 Chadok [from Pali: Jataka]or, “life stories of the Buddha,” refers to the Dhamma (Buddhist teachings) narrating the stories of Lord Buddha’s past lives, including the lives of some of Buddha’s followers. The most well-known chadok among Thais are the last ten lives of Lord Buddha: Phra Te-mii, Phra Chanok, Suwannasarm, Nemiiraj, Phra Mahosot, Phuritat, Chandra Kumarn, Narort, Witoon, and Phra Wetsandorn. The last life, Phra Westandorn, is very well-known since Thais would have had the opportunity to learn about it from school texts of Thai literature, from serm ons, or from the paintings on many temple walls. The story of Phra Wetsandorn, Maha Wetsandon Chadok, was written in various verse forms — rai (ร่าย), klong (โคลง), karp (กาพย์), klorn (กลอน) — and prose or roi kaew (ร้อยแก้ว). The one chanted by monks is in the form of rai or rhymed prose and is comprised of 13 kan (กัณฑ์). Click on the ninth kan (Kan Matsii) to see a sample of the Wetsandorn Chadok composed in the rai (poetic prose) form.

The story takes place in India, the source of the original story. In brief, it is about a prince, Wetsandorn in Thai, Vessantara in Pali. Prince Vessantara is the son and heir of Sanjaya, King of the Sivis, and of Queen Phusati. The prince lives in the capital with his wife Maddi (Matsi in Thai) and their small son and daughter. His generosity is unique. He owns a magic white elephant that guarantees plentiful rain, important in an agrarian economy. But he gives it away to a brahmin emissary from another kingdom, which enrages the citizens. They compel King Sanjay to force Prince Vessantara and his wife, Maddi, who insists on accompanying him and their children, to go into exile. Before leaving, the prince gives away all of his possessions, making the “gift of the seven hundreds’. After a long journey on foot, they reach a spot in the mountains, where they settle down. Husband and wife make a vow to live in chastity. Shortly, a vile old brahmin (a member of India’s highest caste) by the name of Jujaka, who is nagged at home by his young wife demanding that he find her servants, arrives to ask Vessantara for his two children. He gives them up in another act of detached generosity while his wife is off gathering food in the forest. In one of the most touching scenes in the narrative, Maddi swoons in grief upon learning of the loss of her children. (This is one of the reasons the story is so popular among women.) The next morning the king of the gods, Sakka (Indra) is afraid that Vessantara will next give away his wife and be left completely alone. So he comes in the disguise of a brahmin and asks for her, only to give her back immediately. Having received her back as a gift, Vessantara is no longer allowed by social convention to dispose of her. Subsequently, Jujaka and the children come to the court of King Sanjaya, where he ransoms his grandchildren and Jujaka, much to the delight of the listener, dies of gluttony. The king takes his retinue to the mountains and invites Vessantara and Maddi to return, and they do so in a grand procession. As in all traditional Indian stories, the story has a happy ending. The family is reunited, all of Prince Vessantara’s possessions are returned to him, and they all live happily ever after.

In Thailand, Laos, Burma and Cambodia, the V.J. is the main Buddhist festival of the year. Festivities center on its recitation by monks. In Thai, the story is known as Mahachad, ‘the Great Jataka’, and the main religious festival is called Bun Pra Wes (Pra Wes = Vessantara). The recitation of the story, which must be completed within a day, starts early in the morning and ends about 8 p.m. First there is a sermon on the battle with Mara, the god of death and desire, followed by a recitation of a thousand verses of Pali text. A Pali verse is chanted by a monk (or monks). Then the audience throws puffed rice at the Buddha image installed in the public prayer hall. Then the monks ‘translate’ the sacred Pali into comprehensible Thai. The festival takes place during the dry season, usually in March, which is also the hottest period of the year. The symbolism of the water-giving powers of Vessantara’s magic albino elephant has a special potency at this time of year, when farmers wait in anticipation of life-giving rains and their return to planting rice in rain-soaked fields.

India is the source of the Thai story of Phra Wetsandorn. There it is called Vessantara Jataka, and it is the last and longest story in the Jataka book, a part of the Pali canon, the scripture of Theravada Buddhism.. A jataka is a ‘birth-story’, a narrative of one of the former lives of the historical Buddha, Gotama Buddha. (Gotama is a family name; Buddha is a religious title meaning ‘awake’, enlightened’.) There are 547 tales in the Pali Jataka book. In all of these stories, the future Buddha is born on earth as a man, a good spirit, or one of the higher animals, and he is usually the hero of the story. In very many cases, there is nothing specifically Buddhist about the story. Often they are only superficial transformations of older folk tales. Indeed, the Jataka book is one of the world’s oldest and largest collection of folk tales.

The Pali jataka stories contain both prose and verse. The verses were memorized and transmitted orally from one generation to the next and were accompanied by the substance but not the letter of the prose passages connecting them. The verse portions contain narrative elements, but they are incompletely understood without the prose portions. Early in their history, the verse segments were declared canonical; they could not be changed, but the narrative portions, which are a kind of commentary, could be altered and did not carry the stamp of the sacred. Cone and Gombrich (1977: xxvii) observe that the Vessantara Jataka, in particular, is unique in the Pali literature in that it is, because of its length, the style of a folk epic, very much like the Mahabarata, the great Sanskrit epic. Like the latter, the V.J. has long set pieces in which couplets are repeated with the variation of a single word. These portions were assumed to have been songs. In both the Mahabarata and the Vessantara, there is also a striking similarity in the long catalog of flora and fauna in both stories. It is claimed that the original story pre-dates the Buddhist Era, which means before 500 B.C.

Source: Summarized from The Perfect Generosity of Prince Vessantara by M. Cone and R. Gombrich